Breakfast: Oatmeal. Told you, this is pretty much every Monday’s breakfast. Quick, easy, and everyone will eat it as long as it has sugar and milk. Since I am not doing dairy, I’ve been adding coconut cream to my hot cereal and it is delicious.

Lunch: Fried Rice. I made fried rice for everyone but me for lunch. My mom took me out to eat for my lunch, so I ate Thai Red Curry.

Supper: Oatmeal Soup. So this sounds weird, but it actually was quite delicious (unless you ask Will who is the only one who didn’t like it). It was from my The Gourmet Slow Cooker book and was basically steel-cut oats cooked in chicken broth with coconut milk added. The coconut milk was my substitute for cream so that this was dairy free.

Breakfast: Rice Pudding. I made rice pudding the way I usually do with arborio rice, except instead of milk I used a mix of coconut milk and Silk almond coconut milk. With sugar and cinnamon this turned out delicious and was a great hit with everyone.

Lunch: White Bean & Tuna Salad. This is an easy recipe from my italian cookbook Everyday Italian. It’s made with canned beans, canned tuna (I use the stuff in olive oil so no added oil needed to the recipe), vinegar and red onion. For Seth I gave him some before I added the beans so that he just had tuna salad. We put it on top of lettuce and had carrots as well.

Supper: Irish Champ. If you can’t tell, we are in the Ireland section of my slow cooker cookbook. This recipe was not as popular as the oatmeal soup, but it was still good. I think it would have been better had I been able to make it with the traditional butter and cream. Instead I used coconut oil and coconut milk. Still yummy, though.

Breakfast: Oatmeal? I can’t quite remember, but I think we had oatmeal again.

Lunch: Leftover potato soup and homemade biscuits (some with cheese, some with honey). Actually for the school lunches I only sent Elise with leftover soup. The boys just had biscuits, apples and trail mix. When I had my leftover soup I added spinach to up the veggies in my meal.

Supper: Tuscan White Bean Soup. This was another recipe from the slow cooker cookbook. It is supposed to have tomatoes in it, but I left them out as tomatoes are on my list of foods to avoid. It was pretty yummy even without the tomatoes.

Breakfast: Rice with sugar and cream. This turned out to be really popular with my boys. I just cooked up some jasmine rice and they ate it with sugar and a little cream (because we were out of milk). I used coconut cream on mine and it was also delicious.

Lunch: Sweet Potatoes, Black Beans and Toppings. This is pretty self-explanatory. Seth was supposed to have his sweet potato with butter and syrup, but I found out when he got home that he had eaten the butter plain, added the syrup to his water bottle, and left the potato untouched. Sigh. Elise and Will had theirs with black beans and cheese and sour cream. I went out to eat again (a rare occurrence but somehow happened twice this week). I had a hamburger on a gluten free bun with fries.

Supper: Leftover Tuscan Bean Soup. Elise and I also had a treat while we watched a tv show later in the evening. I finished off my coconut milk ice cream and she had some chocolate. Yum!

Breakfast: Rice with sugar and cream. This was a repeat of yesterday’s breakfast because the boys liked it so much that when they saw I had made rice for lunch they really wanted some for breakfast too. So I ended up making another whole batch of rice after they finished off the first one. I also made a dairy free millet bake with raspberries and blueberries to take

Lunch: Rice with Black Beans and Toppings. The kids had a side of tortilla chips as well. And I know I sent something other than beans for Seth, but I can’t remember what. For John and I, I made some sauteed kale to mix in with the beans as well.

Supper: Taqueria. We went to my mom’s birthday celebration and had a variety of things from the Taqueria.

Breakfast: Fried Oatmeal. This is a breakfast we had in my childhood that I make occasionally for my kids too. It works best if you have leftover oatmeal that’s been in the refrigerator overnight so it

is all sticky, but I made some from fresh oatmeal as well since we didn’t have enough leftover to feed everyone. Basically you make patties with the oatmeal and fry in butter (or coconut oil as we did) until crispy on the outside. Then serve with syrup. So yummy!

Lunch: Rice and Beans Plates. This is by far my favorite meal so far this month. I baked some sweet potatoes, made some red rice and more Brazilian Black Beans. Then I put out all sorts of toppings like salsa, cheese, avocado, cilantro and caramelized onions. Everyone could choose their own combination. Pictured is my plate, which had tomatillo salsa, cilantro, avocado and caramelized onions.

Supper: Veggie Taco Salad. I sauteed some onion, green pepper and corn with some of the black beans from lunch and seasoned with salt, cayenne pepper, and garlic powder. Then we made taco salads with it. Mine is with sweet potato tortilla chips (one of the few kinds I found that didn’t have corn oil in them, which I can’t have) and green salsa. The kids had regular tortilla chips and cheese on theirs. The only complaint with this meal is that I overdid the cayenne pepper and it was pretty spicy. The kids had some leftover candy for dessert and I snuck some coconut milk ice cream.

Breakfast: Rice with sugar and milk. I was looking for something easy for breakfast and I just decided we’d do rice again since everyone likes it.

Lunch: Leftovers. I had some leftover tuna & white bean salad, but the kids chose to forgo eating any leftover since they had all had snacks at church and I was planning on doing  an early supper. 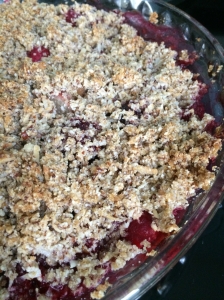 Supper: Lemon Pasta and Salmon. As promised I made a bean free meal for Sunday feast day. The lemon pasta was with rice noodles. For dessert we had berry crisp with a gluten free topping served with ice cream (mine was coconut milk vanilla ice cream).