We’ve been in Alexandria now for 2 weeks. As John has mentioned a couple times, the next three years will mark the longest we’ve been in one house since we sold our house in Siloam about 6 years ago. Since then we’ve moved from house to house in NWA, then to Germany and back again, and now to Alexandria.If all goes as planned, we’ll be in Alexandria longer than we were in Germany, even longer than we attended Grace Episcopal Church in Siloam. It seems like such a long time in many ways, yet in others, very short.

Knowing this sense of a possible security of place for the next three years has meant that I have looked forward to settling in, making this place our home. It means buying furniture and decorating to our taste instead of living with whatever we happen to be given. But unfortunately, we still have at least 4 months before that happens. Right now we are house-sitting for fellow seminarians who are gone for the summer. We are so so thankful for the provision of their house. We love living here, but it does mean that most of our stuff sits in storage waiting for us to have our own space to put it. At the beginning of August we will move on campus. But because the family housing won’t be completed by then, we will be put in some sort of temporary housing until Fall break, when they hope the apartments will be done and everyone can move into their own place. So again, we will make do, live temporarily, get by without settling in. 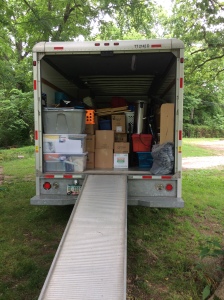 We should be good at living this way by  now, but I feel like what happens, what has been happening for the last several years, is that we never truly live life the way we want because it is too easy to say: “We’ll make those changes, live the way we want to once we are in our own place.” When living in constant transition, you end up putting off lots of important things because it is easier. Perhaps this unexpected change in plans is a chance for me to practice living the way I want no matter how stable I feel. After all, even the 3 years in seminary is still a transitionary phase. If I want to live intentionally this 3 years, why do I feel I have to wait until my house is semi-permanent? That may be helpful, but I think perhaps I’m just making excuses if I can’t start making some changes now.

At the same time though, I want to give myself and my family lots of grace. Not only are we living in a temporary physical home, we are learning a new balance of work and living. We have never before had a time when I was working as much as I am now. We have never before had to figure out how to balance running the household to the extent we are now. When I get frustrated about how it’s going, John reminds me that it has only been 2 weeks. “This will take time to figure out,” he says. And he’s right.

In general it is going well, my main frustrations focus around the grief of letting go. Despite the fact that there are lot of household care things that I don’t enjoy and gladly would share with John, there are others that I have grown accustomed to being in charge of and that I am struggling to let go. The biggest of those being cooking, grocery shopping, and planning meals. I still do some, but I’m not home for several meals each week, so we are trying to figure out how to work it out with two of us shopping, two of us making meals, and two of us trying to live within a single budget. And of course it is all complicated by trying to learn to shop in an area with a much higher cost of living than Siloam Springs. What it will come down to is lots of communication. And some of those conversations will be hard, because if John and I have one thing we tend to “fight” over, it is meal planning. I know, that comes as a surprise, doesn’t it? But it’s an emotional area for both of us and we have different ideas of how to approach things.

So, I have come to the conclusion that this time of temporary housing will be a time of exploring what I want home to look like. I will take the time I would have been using to set up my house to explore my new place in my family, to sort out the balance of house management, to think through what living intentionally looks like, and to process a few of the parenting and lifestyle things John and I have been working towards changing. In short, I will take this time to set up our real home, the home that moves with us no matter where we go.