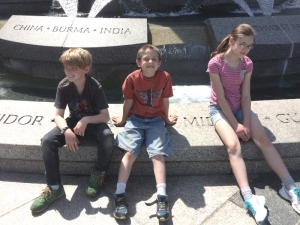 It’s interesting how much of my parenting is shaped by my experiences as a child. I struggled a lot with doubt, questions, and guilt as a child. I wanted to know the truth and rest in it, but was frustrated that my mind did not always cooperate, that I was plagued always by questions instead of certainty. It took a long time for me to accept the questions as part of my experience. And it took even longer for me to see the value of uncertainty. And because I never want my children to feel guilty for asking questions, I tend to encourage those questions.

Even before my recent faith shift away from evangelicalism towards a more progressive form of Christianity, I didn’t like to answer my kids questions with too much certainty. For one thing, I recognized that I am never sure enough myself to give them a definitive answer and for another thing, I wanted them to be ok with knowing that there were multiple answers to any one question. So when asked about science, faith, and life, I would often answer them with: “Well, some people believe a, others think b, and I tend to agree most with c.”

As I become more and more comfortable with my own questions, I have been able to be even more relaxed about theirs. I think when Elise was young, there were definitely some questions I felt that she needed a very clear answer to. If she asked about God or Jesus or salvation, then I was definitely going to give her the black and white answer I believed was necessary for salvation, even while at the same time feeling anxious over my own lack of certainty. Since my understanding of salvation has completely moved away from assertion of facts, I no longer mind allowing uncertainty in even those things that I once considered the essentials of faith.

Kids have a lot of questions, even while accepting the oddest things as truth. But Elise has always been incredibly tied to reality. She hates uncertainty and even in the course of imaginative play always wanted to know where the line of reality was. It frustrated her to no end a few years ago when Will was convinced that his stuffed animals were alive. He would not admit that he was just pretending, but stubbornly resisted her every attempt to teach him the truth. She would get so angry about this that she would try to bring me into the argument. “Mom!” she would say, “Will you please tell him that stuffed animals are NOT alive!” And I would never step in. This was more about Elise than it was about Will. I truly didn’t care if he believed his animals were real. Possibly, deep down, he knew they weren’t, but liked to rile up Elise. But I wanted Elise to be ok with letting go of control over the minds of those around her. I wanted her to be ok with uncertainty.

As the kids have gotten older, the dynamics have changed. Both Will and Seth love to believe the impossible. Or pretend that they do. I can’t always tell where the line is in their play, and that is ok. They like to live on the edge of mystery. But they don’t always like to allow the other to be comfortable there. Sibling dynamics are such that there will be teasing surrounding each one’s chosen fantasy. Will also likes to try to convince Seth of fantastical creatures’ existence because Seth so wants to believe, even when his logical side tells him this probably isn’t true. You can hear the struggle in his voice as he argues back. “That isn’t real, Will! Is it?”

The other day Will was giving Seth a hard time about Santa Claus. Seth has tried to believe in Santa Claus for years, even though we have never really “done” Santa Claus in our house. This has actually been one of those areas where my child has taught me to let go of controlling what another person believes, and now I only really step in when the naughty or nice part comes up, but that I addressed in another blog post. (If you read that blog post you’ll probably notice my lack of an emphasis on mystery in celebration. I have definitely evolved since then.)

But back to the conversation of a few weeks ago. Will asked, partly in seriousness, and partly to annoy his brother, who was sitting next to him: “Why do people believe in things that aren’t true, like Santa Claus?” “That’s a good question, Will,” I answered resorting to my tried and true parenting tactic of answering a question with a question. “Why do YOU think that people believe in things?” “Because they’re dumb?” Will answered (actually I can’t remember his exact reply, but this is most likely what he was thinking even if he didn’t say it out loud.)

Wanting to encourage Will towards self-reflection rather than attack, we brought up one of Will’s favorite fantasies. Against all evidence and in the face of opposition all around him, Will believes in dragons. So of course we brought that up. And in comparing Santa Claus and dragons (who knew those would ever come up in the same conversation?) we were able to actually ask some meaningful questions about the nature of belief. 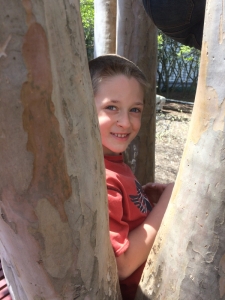 I don’t know if that conversation was marinating in my kids’ heads at all over the next few weeks, but I think maybe it was. Because on the way home from church a few days ago Seth asked a very serious question: “Why do people believe in God? I mean you can’t see him, we don’t know if he’s actually real. He might be or he might not be. It’s a mystery.” And rather than going into panic mode, wondering about the state of my child’s soul, I merely said: “Yep, life is full of mystery.”